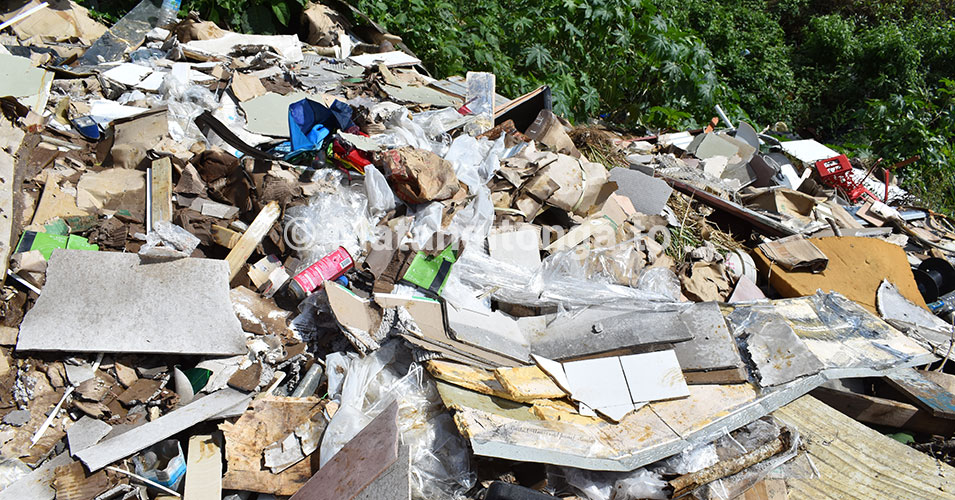 NUKU’ALOFA – June 11, 2018: 11.50am (Matangi Tonga): Tonga is finding it difficult to manage illegal dumping of rubbish including plastic bags in Nuku’alofa, as it celebrated World Environment Day on June 5 with the worldwide theme “Healthy Oceans – Beat Plastic Pollution”.

Plastic bags and packaging, snack packets, sweet wrappers, water bottles, aluminium cans, etc., are found continually littered along Nuku’alofa’s waterfront, streets, other public places, as well as being washed up from the ocean on to the foreshore.

Plastic items are found throughout Tongan shops and in the market places, but its a well known fact that plastic takes a long time to decompose, while experts say our plastic litter will be around for 1000 years.

Tonga can do more

Although there is no way to quickly eliminate the problem, Filimone Lapao’o, Senior Environmentalist at the Department of Environment, believes Tonga needs to do more to control it.

“I believe we need to do something like perhaps move towards banning the use of plastic bags. There is no law or policy in Tonga to deal specifically with plastic rubbish,” he said.

He told Matangi Tonga that although his department should focus more on the issue, the problem is that they don’t have enough resources.

“In the waste management area, there are only three of us. Our workload does not allow one of us to be able to concentrate on one specific issue such as plastic bags,” Mr Lapao’o said.

“But we currently manage the enforcement of the litter law, including littering and burning plastic. If you are found littering or burning plastic, you will be issued with an on the spot fine.”

He said fines have already been issued to individuals and businesses.

Mr Lapao’o said that when plastic is discarded, it releases toxic chemicals including Persistent Organic Pollutants (POPs) and heavy metals.

“It can accumulate and flow on to the food chain as well. Marine life can swallow plastic such as turtles and whales. Even birds can mistakenly eat them up.”

Plastic left in dumps and various areas also supports the productivity of insects such as flies and mosquitoes.

To celebrate World Environment Day, Mr Lapao’o, his work colleagues and their families cleaned the Nuku’alofa waterfront on June 4.

“We picked up rubbish on Monday along the waterfront on Hala Vuna, from the bus stop to American Wharf. It was littered with mostly plastic and cans,” he said.

They collected three truckloads of rubbish, and taken to the Tapuhia Rubbish Dump.

He added that even though there are rubbish bins placed along the waterfront, people still discarded their rubbish on the ground. Rubbish also washed up onto the foreshore from the ocean.

“We have asked so many times for Tongans to please be aware of where they throw their rubbish, especially plastic items as they affect our environment, soil, and ocean.”

The Department of Environment have run public campaigns through radio and TV appealing to people to stop littering illegally.

Mr Lapao’o says it has helped a little but it is not having an immediate impact on people.

“We have been trying to stop people littering for over a year in many places. There are a few illegal rubbish dumps in Mataika / Halaleva. We’ve tried to raise awareness through public campaigning on the radio, TV, and put up signs in the area, but people are still throwing their rubbish there illegally,” he said.

“We even talked to town officers to liaise with the community to stop dumping rubbish illegally as we’ve received complaints from the public.”

Other areas where people are illegally dumping rubbish include Fanga, and at Sopu past the Fisheries Department on the waterfront.

Mr Lapao’o said after Cyclone Gita, the amount of rubbish at Sopu increased so much that his department cannot manage it properly.

“Green waste is fine as it will decompose quickly but plastic waste such as plastic bags, bottles, cans and tins still need to be sorted and taken to the Tapuhia Dump site.”

He added it would help if Tongans stuck to the current weekly rubbish collection system, or take their rubbish to the Tapuhia Dump site, to reduce costs for the Tongan Government to manage waste.

Other Pacific Island countries have implemented moves to reduce or deter people from using plastic bags.

Vanuatu has banned plastic bags, and Samoa has moved towards using biodegradable bags instead. In Fiji, a plastic bag levy was imposed last year for shoppers.

This website is supported by the UNDP under GEF funding for the Tonga Ridge To Reef Project.

This website is supported by the UNDP under GEF funding for the Tonga Ridge To Reef Project.